Finding her own path to happiness with NortonLifeLock

The course of Leena Elias’s life was laid out before she was born, just as it had been for her parents and their parents before them.

“I was very much a product of an immigrant family. Like many couples in India, my parents had an arranged marriage, meeting maybe twice before they wed. However, my mom was insistent that she finish medical school before marrying and that’s exactly what she did. There was a major shortage of physicians in the US in the 1970’s so they packed up their lives and moved from India, the year before I was born.”

Leena’s mom was an emergency room physician; her father was a doctor in private practice.

“Mom scheduled her work hours around my dad’s schedule so that she would be home for us. She’d be there when we got home from school then leave for her 7 p.m.- 7 a.m. shift. Food was a big way in which my mom expressed her love for us so we’d be hanging out in the ER, eating all the home cooked food my mom had made for us earlier in the day, waiting for my dad to pick us up.”

With a large, extended family to support back in India and their growing family in New Jersey, the intense schedules took their toll on the family. But despite the constant challenges, the expectations on Leena and her siblings were very clear.

“My parents were so busy—they didn’t have a lot of time. What little time they did have, they spent driving us around to Indian classical dance and music lessons. We didn’t sit around and play board games as a family. I don’t recall my parents ever checking our homework, but we were expected to study hard and get good grades.”

A path to independence

From her earliest memories, Leena’s parents drilled it into their kids that education formed the foundation of success. Her mother emphasized the importance of achieving one’s goals and being self-sufficient. But for Leena’s parents, these lessons became a bit of a mixed blessing when it came time for Leena to choose her own path.

Leena received a full scholarship to attend Rutgers which was just 15 minutes away from home. But the desire to be a little more independent—even self-sufficient—was strong. Leena had her heart set on Carnegie Mellon University and was accepted, one of only eight women in her Mechanical Engineering class of 80 students.

“As challenging as it was to get into the program, it took just as much effort to convince my parents to let me attend. I agreed to their terms: I could stay at CMU if I did really well. I love math and science, so I did well. And upon graduation, I remember very clearly thinking that if I could survive four academically intense years at CMU, I could do anything!”

Carnegie Mellon provided Leena with more than a hard-earned degree.

“I met my husband at CMU when I was 19; he was a grad student and I was an undergrad. Born in India, he was focused and passionate with a bright future ahead.”

However, their relationship had its challenges.

“My parents didn’t approve of our relationship. While my husband was born and raised in India, he was also Jewish. Coming from an orthodox Hindu family, this was a deal-breaker.”

Leena had already proven herself capable of making difficult decisions. She had seen her parents make bold and sometimes unpopular choices with their families in order to pursue their dreams. Strengthened by her sense of independence, Leena got married four years later against her parents’ wishes. She and her parents would not reconcile until she gave birth to her first child, five years later.

“I wanted my boys to see me happy”

In 2005, Leena and her family moved to India for her husband’s work. What started as a two-year commitment ended up lasting seven years and saw the birth of three children. 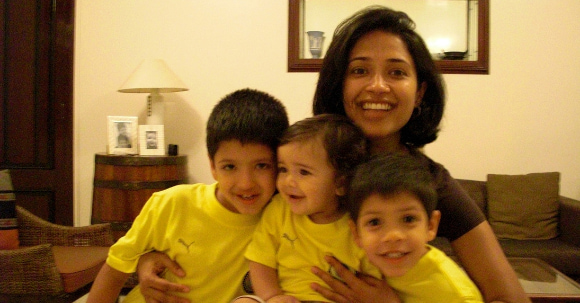 “I wasn’t able to work during this time, but I raised my three boys. As any parent can attest, that is a full-time job. But I had worked so hard throughout my career, I needed to keep my mind and energy flowing. In my spare time, I did volunteer work at my son’s school and at a non-profit’s cooperative to help provide aid to India’s homeless and vulnerable children.”

But as her kids got older, still unable to legally work, Leena looked back at her own upbringing.

“I don’t remember seeing my own mom happy and I would have loved to see her happy when I was growing up.”

It was a stark realization.

“I was thankful for having been able to stay home with my kids for so long and that my husband could provide for us so that I did not need to work. But I came to see that I needed to work for my own mental health. I needed my kids to see me, as their mother and as a woman, working outside the home. I wanted my boys to see me happy.”

The family returned to the US in 2012, largely so that Leena could resume her career. Despite her education, her passion, and work ethic, the seven-year gap in her resume quickly became a roadblock.

“I spent almost two years looking for a job and just kept hitting a wall because of the gap in my resume. I got a break in 2015 when a recruiter put me in touch with a hiring manager at Moovweb for an Engagement Manager position. It had been 10 years since I’d last worked in the corporate world and it was a junior role for a fraction of my compensation 10 years earlier, but I was excited, and I got the job.”

An open door and an opportunity were all Leena needed.

“I stayed at Moovweb for 2.5 years and during that time, went from being an individual contributor to being a director, managing a global team of web developers, QA engineers, and customer success managers. I left Moovweb for a Director of Professional Services role at Narvar, working with retail partners to implement Narvar’s post-purchase solutions. I later joined Avast as VP of Product Delivery where I lead all delivery of Family and IoT solutions to global partners, primarily telcos. I was excited to join NortonLifeLock in September 2020 to lead the Product Operations team in a role that draws upon many of my past professional experiences.” 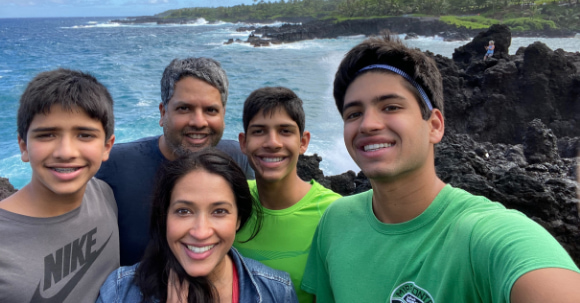 “I’m focused on listening to my team and their ideas. I don’t have a strong hand on ‘this is the way things are going to be’. I have a continuous improvement mindset and want to empower my team to reimagine how we do things. This is what engineers do — we use our technical expertise to solve problems.”

While she is respected as a strong, thoughtful, and innovative leader, her own learning journey continues.

“Sometimes, I’ll say to my manager, Gagan, that there’s something I felt I could do better or something I didn’t like about my work. And his response is always along the lines of, ‘You know, a guy would never say that to me. You’re being too hard on yourself’”

Lessons like these are ones that Leena imparts to her network of women colleagues; mentorship is close to Leena’s heart.

“I have to remind myself—and the women on my team—there’s a need to feel like you know everything, and you’ve got it all, but it’s an impossible goal. No one can know everything and that’s okay.”

How does Leena refocus her own thinking?

“I joined NortonLifeLock during the pandemic. It was an expanded role, with a lot to learn. So rather than beating myself up about what I didn’t know, I asked, and continue to ask, a lot of questions—common sense questions. You’ll soon find that many people want those same answers but are afraid to ask. If you invest the time to get to know the subject matter, whether it’s speaking to others on your team or maybe reading some market research, you’ll find yourself with enough information to make decisions or prioritize, even if you don’t have all the answers yet.”

It’s an important approach to one’s role, no matter where you are in your career journey.

“In life, as roles get bigger, the questions become tougher and the pressure is greater. You have to remind yourself you’re not going to know everything–you do have to get comfortable with that. I think, especially for women, it is very, very hard to do because many women are quick to focus on what they don’t know. You feel like you’re competing against a whole group of other individuals who don’t have that same problem. But that’s simply not the case. All of us—regardless of gender—are always learning something new.”

Leena’s life has taken her to many interesting places but today, she is proud to be a part of the NortonLifeLock team.

“NortonLifeLock promotes a culture of ownership and accountability while fostering a strong sense of teamwork. My manager provides me with so much support and guidance when needed, but at the same time, empowers me to make decisions. I love what I do, I feel fortunate to be where I am in my career.”

And what about life at home?

“Especially because I have sons, I want them to know that women are their equals and that starts with what they see at home. I want them to know that I have a place in the world that exists outside of my role as their mom. It’s been amazing to see how their relationship with their dad has become even closer because he’s home so much more now. We’ve found an amazing balance.” 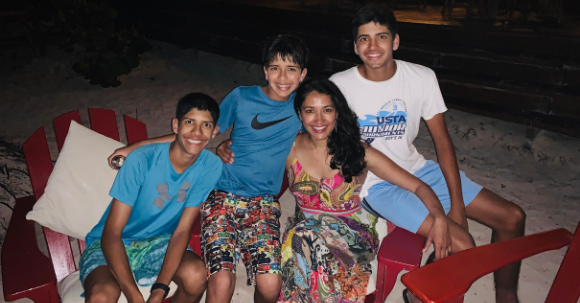