A career with creative chemistry

Sonya Ryan’s son entered the room while we were talking about leadership and creativity on Zoom. Sonya joined Lion 10 years ago, and unexpectedly found a way to cultivate both her technical skills and creative flair at work, all while raising a chatty little boy.

We talked about being a woman in a non-traditional industry, finding ways to use your creativity in a scientific role, and keeping your career thriving through having children.

Sonya joined Lion, “Fresh out of uni! I wasn’t expecting to get a job. I was looking at taking a gap year then doing post grad study. Lion sucked me in by giving me so many awesome opportunities!”

She started as a lab technician, a common entry position following a science degree.

Putting her hand up for everything provided Sonya with lots of opportunities and exciting projects.

“I hated sitting at a desk all day. Getting to walk around and make products is what I enjoy. Once I became a team lead, I had more room to join projects throughout the brewery and be involved in value-creation and improvement projects.”

“We do a lot of testing and learning, designing recipes and drinks, coming up with cool ways to market them. We work closely with the marketing and innovation teams.”

Sonya loves that she’s not siloed in her role. “There’s a massively inclusive environment across Lion. It’s so much more engaging to be working with other departments on a common goal. It’s a good balance, as you have to have the technical side to get recipes out properly and commercialize them, but you’ve also got to turn on your creative side if you want to change the beverage industry. I love it, and I can tell my team love it.”

She loves the combination of creativity and technical skills, and when I asked how to create both in a role she shared: 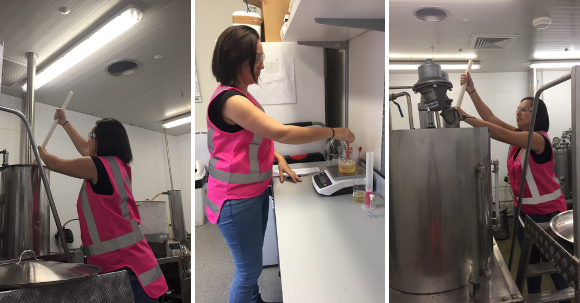 “It was such a learning curve, but there was so much support around me. I had a team of six guys who were all much older than me, and I was the only female team leader onsite at the time, out of 15-20 team leaders.”

Challenges create growth though, and with what she knows now, Sonya’s tips for new leaders are:

Things have changed in the industry in the time since Sonya took on that first leadership role.

“Back then, there was a lack of diversity. So much has changed in the last seven years! Now there are so many more women, people of different backgrounds and diversity of thought while recruiting.”

Being on parental leave certainly doesn’t mean out of sight out of mind at Lion, nor that your career needs to stall. Two-thirds of the way through Sonya’s leave, she enquired about a role opening and discovered she was already the preferred candidate. Sonya did the whole interview process from home with a baby in her lap and returned to work three days a week, later building to four and then five days.

For Sonya, managing career progression as a parent relies on good communication, continually networking, and understanding your strengths. The Lion Flex program has supported Sonya’s success as well.

“It’s awesome to have that flexibility and helps open up creativity. Flex is super important to me. We can work from wherever we want, and it allows you the freedom to do the job the way you want.”

Twelve months ago, Sonya was promoted to Beverage Development Manager for ANZ.

“Now, I have a wider focus and am a lot more involved in the strategy side. We’re a small team, but really focused and we get to do lots of fun things.”

“It’s a big playground for someone with a technical background. I get to do both of my passions – science and creating. I was torn at school because I used to do a lot of science but also loved art. I’ve naturally fallen into this career by communicating my passions.”