From beauty to brawn

Joanne Thomas used to own a beauty salon, where her favorite clients were the people she really got to speak with and get to know. Ready for a change, she decided to go big or go home and joined Sandvik as a Rock Tools Technician. Now she spends her days travelling to mine sites around Western Australia working with rock tools.

A day in the life of a Rock Tools Technician

Joanne lives in Leinster, a closed town four hours north of Kalgoorlie, where every resident is contracted to (like Joanne, via Sandvik) or works directly for BHP. She says it’s a country town, and everyone becomes friends.

Joanne does surface work, which means she doesn’t go underground in her job. It also means she maintains a standard roster of 9-5, Monday – Friday. Her days are spent travelling to different mine sites to collect and deliver drill bits, doing stock management and sharpening drill bits using grinding machines.

“In a day I might travel to three different mine sites. I pick up all the bits used underground and bring them back to the Sandvik yard, sharpen them, gauge them, paint them, write them up and add them to inventory.”

As in the beauty industry, where her favorite clients were the people she chatted with and got to know, Joanne enjoys the customer service aspect to her role on the mine sites.

She learned her responsibilities through on the job training, which is how Joanne likes to learn. She has to do things to learn them. Sandvik also have a buddy system, and you’re not left on your own until you are confident enough to do things yourself. 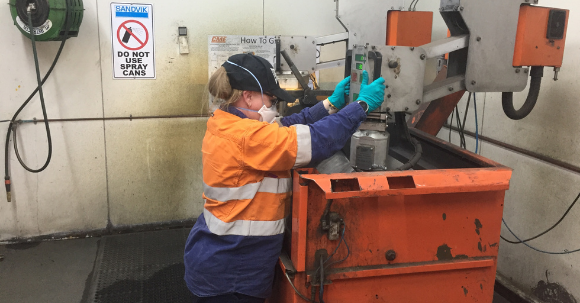 Joanne loves the culture at Sandvik.

“We have a lot of fun and the I’m treated just like one of the crew. It’s sort of like a family. You help each other out and we all get along. Every now and again we have a group dinner so we’re not just interacting at work, and talking about non-work stuff.”

Rock Tools Technician can be a heavy lifting role and Joanne is petite, but that doesn’t hold her back. The drill bits come in various sizes. Small ones might only be five kilograms, and she doesn’t need to ever lift the really heavy underground drill rods. The heaviest items she’s allowed to carry on the job are 25 kilos.

“If I have to lift anything heavy then someone is always there to help me. They know that I can’t lift some of the big things so they’ll just do it for me. The men will ask me if I need help, and if I say no they just leave me to do it. They don’t make me feel like I can’t do anything or I have to prove that I can do it.”

Joanne really only spends about half an hour a day doing any lifting, when she’s loading used drill bits onto the ute onsite and then unloading them at the yard. She spends more time driving than lifting anything heavy, but loves listening to her music and getting some thinking time in while she’s on the road.

To ensure driver safety when she’s driving in remote locations, Sandvik have a travel management system, that notifies management if drivers don’t arrive to a location when they are supposed to. Joanne is in a role where her physicality doesn’t hold her back. 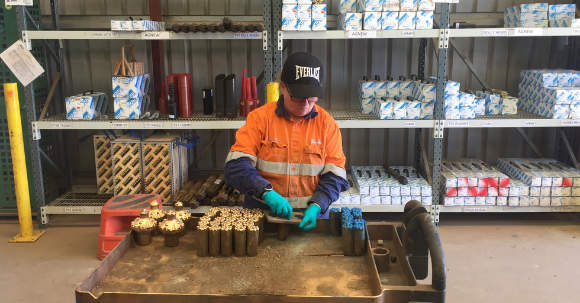 Not many people make the move from beauty technician to Rock Tools Technician, but Joanne has embraced the change. Her husband was working at the mine site for Sandvik, and Joanne originally agreed to move closer to the mine for a year to try it out. They’ve been there for five years now!

Joanne’s daughter and grandchildren live in Perth, and she previously spent a lot of time flying back to see them. As an extra benefit supplied by Sandvik’s Customer – BHP – to all mine site workers (direct and indirect), Joanne and her husband are supplied with four family flights a quarter.

The biggest challenge with reimaging her career was that being a Rock Tools Technician is totally different to anything she’s done before. She also travels to lots of different mine sites, and has to learn the policies and procedures for all of them. Unsurprisingly, the highlights relate to people. She loved connecting with clients in the beauty salon, and still loves getting to know new people.

To someone else thinking of taking the leap into mining, Joanne says to have an open mind and give it a go!

“If you’re willing to learn new things it’s a fantastic industry because you can move from one type of role to another so easily. It’s a fantastic opportunity. You get to see a lot of what goes on and get to meet so many people from different backgrounds.”