Out of the tech trenches to an inclusive culture – AWS

As the newly appointed Strategic Initiatives Lead of ANZ for Amazon Web Services (AWS), Toni Knowlson describes Amazon as the happiest place on earth for her. We talked about why she gives them such a glowing review, the unexpectedly inclusive culture in a tech giant.

We’ve all heard the stories of what it’s like in the tech trenches as a woman, and Toni has had her fair share of those experiences.

“I’ve worked in technical businesses, so I’m always outnumbered. It’s pretty rare to have a team of women. Quite often there’s commentary or behavior in the team that you have to adjust to, because if you don’t adapt, then it’s very uncomfortable for you.”

But at AWS, there is none of that.

“It’s very appropriate. There are no snide comments, no inappropriate jokes in the kitchen. When you join AWS there are practices and norms that you observe and follow, plus there’s training and education. Our leaders do a good job of setting those standards. Then we do training and development around ethics and compliance, as well as harassment, inappropriate workplace behavior, retaliation. Everyone has a right to feel safe at work, and we put that ahead of any other right.”

AWS don’t shy away from hard targets around diversity, or from taking the hard road to preserve their strong, inclusive culture.

“I’ve often pinched myself and thought I will never have a job like this again. So, I’m conscious of trying to enjoy all of it while I’m doing it. Amazon is easily the most inclusive place I’ve ever worked. Because people have a growth mindset and are self-aware, it breeds a different conversation.”

An obsession with customers

One of the things Toni loves about her work is the focus on customers.

“I’ve never worked for a business that is myopically customer obsessed. Every day, every mechanism in the business reminds you that you’re there to serve the customer. Annual reviews are anchored around the impact you have on the customer.”

AWS have 14 guiding leadership principles, and top of the list is Customer Obsession. Leaders are expected to earn and keep customer trust, and while they pay attention to competitors, they obsess over customers. Decisions are customer-centric, even as far as sales people having a target for reducing customer spend; they have to go into customer accounts to find ways to reduce their bills.

“It feels like a big start-up, we move quickly and obsess over customers.”

Toni couldn’t speak more highly of the culture, and drew out the way people interact.

“The leadership principle of ‘earn trust’ requires you to be vocally self-critical. That means we’re working with people who are self-aware and have a growth mindset. It’s very different to a lot of businesses.”

Toni herself says that she’s changed in herself because of the AWS culture, and is grateful for that evolution. 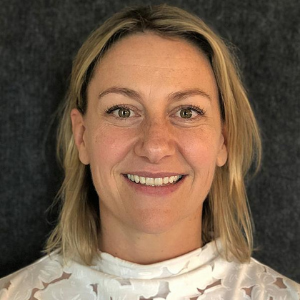 Building a culture that supports performance

AWS has an incredibly inclusive culture, and they made decisions for the benefit of customers and their internal people. AWS’ metric for managers includes a measure showing which leaders develop their people and build capability that allows them to be effective in another role.

“There is very little politics, very little exclusion, both of which I think happen in a lot of businesses. That limits you from doing a great job, forming great friendships, and having an impact on your customers. We have high standards and zero tolerance for poor behavior.”

We asked Toni what she thinks it takes to shape a great culture, and she shared:

It’s difficult to change a culture but based on Toni’s experience the end result is certainly worth it!

Women at the top

Toni told us of senior leaders sitting in meetings where they are actively looking for women to fill roles, and says the signaling of culture is really strong at AWS.

“One of the earliest signals that made me feel comfortable at work is that a number of our leadership team are LGTBQI+. At work there is enough diversity that people often see themselves reflected back. That’s why signaling is so important.”

Toni described her boss as having an incredible eye for diverse people, and has an entire team that look completely different. He sponsored Toni into the business – on paper she may not have been the obvious choice for the role based on her background but he could see the capabilities she had that didn’t exist in the team already.

Some of the best advice Toni received from a senior woman was to focus on working with people who see the value that you bring to the table.

“You can’t fight gravity. Align yourself with teams and people who see the value you bring – you’re going to be more effective than any other way to break through barriers. The best sponsors see your talent, so find those people through whatever means you can.”

Toni was only officially appointed to Strategic Initiatives Lead after our chat, and prior to that was the Digital Innovation Lead, Australia and New Zealand. She spent time across all Amazon businesses, helping them innovate more quickly. When she was being considered for the new role, she told her boss she was pregnant and would be heading for parental leave in six months. Having always feared she’d be disadvantaged if she had a baby, Toni was understandably a bit nervous despite all the positive signaling at AWS. Her boss responded, ‘Fantastic!’ and she was successful in the move without any friction.

“Now that I’ve experienced working in a really great culture, that’s where my bar is. I’d struggle to go back somewhere else.”