The surprise benefits of an engineering career with Evolution Mining

When we think of a career in mining, we might go straight to stereotypes, but Evolution is determined to shake things. They have women at all levels throughout the organization, interesting projects, and are committed to increasing their team’s number of skilled women.

She’s been at Evolution Mining for a year, since they purchased Red Lake Operations, and she was there for four years before that. She shared with us why she became an engineer, the interesting projects she’s getting to work on, and the biggest surprise about working in mining that you might not expect. 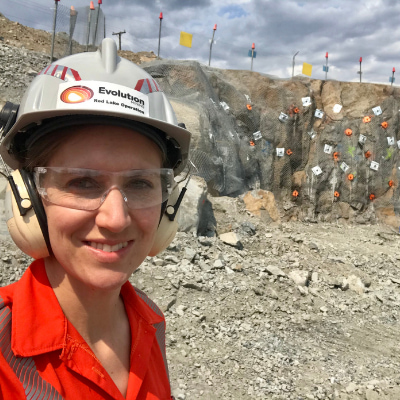 Why did you choose to study and work in engineering?

I stumbled upon it really. While studying Geology in South Africa, I applied for a bursary with Anglo American Platinum. They offered me a bursary for ‘Rock Engineering’ instead, although I had no idea what the discipline entailed. I researched the field, accepted the bursary and have had no regrets!

What is the most interesting project you have worked on during your time at Evolution Mining?

“The CYD Decline project (mining of a box cut and establishing a portal and decline) is certainly a highlight. Throughout my career, I have always worked in underground hard rock mines, so this project, touching on surface mining principles, is exceptional.”

What transferable skills/personality traits do you think are important to have for those wanting to get into engineering?

Your reputation will likely mean more than any credential. You should be able to: envision the big picture AND be detail-oriented; stand your ground and tolerate pressure/stress; communicate efficiently; prioritize tasks and manage time effectively; have good interpersonal skills; own your mistakes and learn from them: adapt to change quickly and see opportunity in challenges.

What’s the most unexpected thing about your job?

“People skills are perhaps even more important than technical skills.”

How does Evolution Mining empower women in the workplace?

Evolution Mining employs women in various jobs all through the ranks. Furthermore, there is an atmosphere of openness to bring up issues or new ideas. This is empowering to women but also to any other gender..

What are your future career goals, and how is Evolution supporting your development?

My long-term career goal is to become a Corporate Ground Control Engineer or similar. Currently as a mom with young kids, I am busy with that very challenging phase of building a family and a career. Evolution is helping me with this by exposing me to interesting projects while also accommodating my family needs.

What’s it like working as a woman in a male-dominated field?

“I think it really depends on the culture of the country and company you work in. During my time working in South Africa, I had to deal with some really difficult situations, whereas in Canada, I have never had one occurrence where I felt gender mattered.”