Using Data for Good and Women in STEM

Sylvia Howes has been with Altis Consulting for three years, a BRW Employer of choice every year for the past decade. She’s passionate about using data to create change and has just moved into the full-time role of Data4Good Lead. Altis founded Data4Good to encourage corporations to use data to make a positive impact on the world.

Her extroverted, chatty personality shines through in conversation, and she breaks any stereotype you may have about who can succeed in a data career.

Sylvia, a Senior Consultant at Altis previously spent 20% of working week on Data4Good, and in March she transitioned into a full-time role.

“It’s been interesting trying to switch roles while adapting to this whole new work-from-home world. Even though I work for the same company my role is very different. At the same time, I’m so grateful to have this opportunity.”

When Altis’ CEO John Hoffman announced they were getting involved in Data4Good, Sylvia thought, “That sounds like the sort of thing I’ve always wanted to do – using data to do good things in the world. I was arms up in the air cheering and I’m sure he was at the front of the room wondering who’s that crazy nut down the back there!”

She attended the first Sydney Data4Good conference, loved it, and suggested a few ideas to improve the next one. John then said, “’Why don’t YOU do that, it’s your turn to run the next one,’ and I took on the NZ conference in Auckland in November!”

“I still feel so excited about it. At the Data4Good conference we showcased stories where companies use data to do good things in the world. Then you’ve got to move from storytelling to actually guiding other companies how they can do it for themselves – that’s where we’re focused at the moment; we’re looking at ways that companies can use data they have to do good. We define good as actions that support the UN Sustainable Development Goals.”

“We’re currently looking at the gender pay gap, researching which companies have tackled it, who could benefit from assessing it, what you can look into when you consider gender pay, what defines a gender pay gap and all the metrics that go into it. We’re also working with The Tasmanian Nature Company where we’ll be using machine learning to help gather information from their Tassie Devil camera traps. Other projects include one with Take My Hands, a social enterprise that connects those with medical equipment they no longer require with people who need it in the Asia Pacific Region, as well as looking at potential COVID-19 data projects.”

Sylvia’s role as lead for Data4Good means she is deciding what projects to focus on, connecting with potential partners, organizing events, reaching out to charities who may benefit from the work, along with all the operational pieces of running the program. “I’m involved in many different areas and juggling them all” 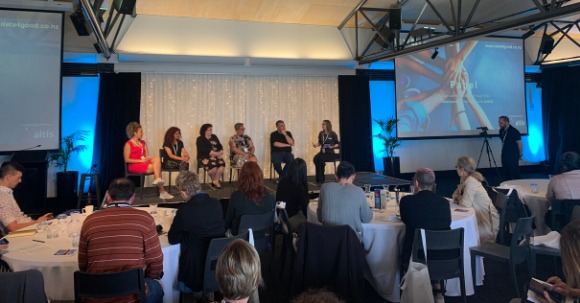 Should You do STEM?

Sylvia studied science, communications and information systems at university, and not knowing what she wanted to do afterwards, “just applied for any IT job.” She ended up in Business Intelligence Reporting, using historical data to help businesses with decision making, compared to data science which has more of a statistics and predictive element. Both are about working with data to reach conclusions.

For women thinking about going into STEM, she says,

“Don’t feel pressure about being in the minority of people. Look at your skill set and whether that’s what the roles require. Problem solving and being able to follow logical steps lend itself to coding so why not give it a go?”

“It’s a great industry to be part of, and there are so many opportunities. STEM roles are relevant in almost every company, so whatever your passion is you’re likely to find something.”

“It’s funny, because data science can be used to start changing trends, and maybe in 20 years it will reflect how we used it to solve gender gap issues in STEM!”

On Being a Woman at Work

Knowing that there are less women in data roles and STEM subjects in general, Sylvia shares,

“I want women to feel more confident in themselves, to be proud of all the skills they’ve got, and realise how they can discuss and advertise them in a way that other people can realise their value, particularly in an interview situation.”

Look at both corporate and non-corporate skills you’ve demonstrated, and make sure you know how to articulate them. Sylvia recommends creating an elevator-style pitch for each of the things you want to be able to demonstrate, particularly in interviews.

At Altis they focus on removing gender as an issue, while at the same time looking to attract top female talent to improve their gender ratio. Sylvia says, “The CEO is a cheerleader for women in the workplace. They try and encourage opportunities for women and will overlook gaps that can be trained later if you’ve got the right mojo.”

Altis is also involved in a program called Lucy Mentoring, where Altis employees mentor women studying STEM in university, to help get their career off on the right track.

Growing Your Career Through Networking

Being involved in Lucy Mentoring is one way Sylvia is growing her network. She enjoys connecting with people and building relationships and shares;

“I wouldn’t say I deliberately network. I just go to things that are of interest to me and chat with people, because that’s what I enjoy doing. I’m quite chatty, I can chat to strangers and I’d never call it networking.”

Sometimes you may go to an event specifically to meet a particular person, or discuss a specific topic. If you’re not naturally as chatty as Sylvia, or feel a bit shy, “you’re at the event to hear someone speak, so talking about the topic or speaker is a great way to start a conversation. The small talk might lead into something bigger. It’s like speed dating, you’ve got to form connections with complete strangers.”

The main thing is being brave enough to try it, and not putting pressure on yourself. “I’ll admit it, sometimes I don’t have the energy to talk to people. That’s ok too. You’ve got to step out of your comfort zone but don’t force yourself to always be the chit chatty networker.”

As a general career rule, Sylvia says, “Anything is possible, some things are just more challenging. Say yes then build up your skills.”