A Burning Flame and No Red Tape

‘Robot Queen’, ‘Code Wrangler’ and ‘Pancake Stack Developer’. These are just some of the funky job titles you’ll come across at web development corporation, Automattic. The titles reflect the truly colourful nature of a company made up of 900 ‘Automatticians’ who log in from across 65 countries, and who speak 84 different tongues.

Keen to find out more, I sit down with two of their biggest diversity and inclusion champions, Anne McCarthy and Toby Nieboer. She’s based in San Diego; he’s in Melbourne. Their roles? She’s Happiness Engineer and he’s Hiring Wrangler… or ‘Customer Service Support’ and ‘Recruiter’ to muggles.

Anne, a member of the LGTBIQ+ community, joined Automattic in 2014 with a fire burning deep in her belly. She had just endured a brutal six months as the only woman in a team of 16 in a financial technology company. There, she says, she had been emotionally manipulated, yelled at, and told, “This is a great opportunity to learn how to work with men.” Anne’s experience proved a powerful catalyst that would see her carry the torch for inclusion at her next workplace.

“I came to Automattic very clear about how I felt about diversity and inclusion. It was a kind of test – I didn’t want to work at a company where I couldn’t speak my mind, be queer, or be a young woman with opinions. I wouldn’t tolerate that. Automattic totally embraced that, which is a huge credit to them. My terrible experience was fuel to the fire. If I had a less intense experience at the start up, I wonder if I would be less involved in D&I at Automattic,” Anne says.

Since Anne joined Automattic five years ago, she’s been a mighty underdog; building diversity and inclusion within the company from the ground up.

Pre-empting that Anne’s modest character may prevent her from sharing the full extent of her contribution at Automattic, Toby is quick to interject.

“The fact that we have a D&I webpage and that we have all these policies in place is down to Anne – but she’d never tell you that herself,” Toby shares.

We soon learn Anne started an LGTBIQ event series in partnership with Google for NFPs and small businesses within her first six months, a remote mentorship program in her second year, and Autmattic’s first employee resource group known as ‘queermatticians’ in the last year.

Then, in 2016, Automattic’s CEO Matt Mullenweg asked all leads to create a 3-year plan. True to her character, Anne handed in two: one for business and one for D&I.

“I was a leader of the division at the time and thought, ‘Who is to say someone can’t write a D&I plan? So I did. People asked excitedly, ‘What are you doing with this?’ It led to the creation of the D&I Committee. For the first year, we focused on laying out a vision. In 2017, we partnered with other companies to help them pave the way in the D&I space. In the third year, we aim to set the industry standard for remote companies and stabilize our team by hiring a Head of D&I. Eventually, we’d love to open source all we’ve learned too!”

“I do these things to stir the pot in a loving way at Automattic – and the company has cheered me on the whole way. It’s the Automattic spirit – there’s no red tape. If you want something, you can create it. I’ll say, ‘I have this idea – to help LGTBIQ organisations to grow their presence online.’ And Automattic says, ‘Sounds good. What do you need?’ It’s wild!”

A credit to her many accomplishments in the D&I space, Anne has currently paused her Happy Engineer role to undertake a 4-7 month temporary rotation in the Developer Experience team with Toby. As part of the wider mandate of this team, her focus is on developer hiring. The position involves understanding the motivations and professional goals of senior women in technology through focus groups – and it suits Anne to a T. It’s clear Toby is Anne’s number one fan, and when we talk about the end of her secondment, he calls down the line, “We really, really want Anne to stick around – forever!” 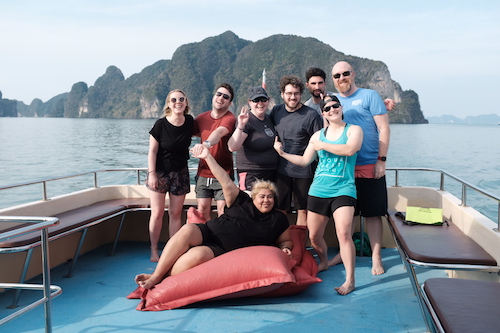 Toby and Anne are on the far right in the Thailand photo (Anne – green shirt, Toby, blue shirt)

After more than five years championing Diversity and Inclusion at Automattic, we ask Anne for her top tips on championing diversity in a distributed company.

“Get some red bull!” Anne laughs. “But in all seriousness, start by showing up. Ask questions, go to meetings and listen. You don’t need to come in with answers. Just put your hand up, volunteer and ask, ‘How do I help?’ Talk to people who are affected and find out what they need.”

2. Make the person directly above you care

“Start bringing up D&I with your manager, and expand your sphere of influence from there. I hate it when people say things like, “I can’t do anything until we hire more women engineers.’ That’s not true! Look around, there are so many things you can do. D&I at Automattic started as a thread in my shirt. I started pulling it and it started growing and growing,” Anne explains.

3. Build your support network in the D&I space

“Reach out to others on the same journey – because you can get stuck. I’m part of Diversity Advocates for support and inspiration. It’s US-centric but it’s expanding. Internally, it’s critical to create opportunities for others to get involved, even if it means engaging people with quick tasks like reviewing a social media post. A lot of the power of doing this work is bringing people with you!”

4. Adjust your glasses: check your bias

“I’ve learned that even when it comes to D&I, I’m approaching it with my own biases. Whether it’s having more confidence when working on causes that affect me, or approaching things in a ‘Western Way’ – I need to remind myself to think about the bigger picture. It’s easy to see a male-dominated field and think, ‘A bunch of dudes.’ But we are each on our own journey… I don’t know what it’s like to be a parent! I only know English. There are tonnes of gaps in my D&I experience, so I keep that in mind.“

“After doing this work for many years, I’ve learned that genuine engagement is key. When someone says something out of line, I’ve seen people jump in to set the record straight. Sometimes that is needed. But my objective is to keep people engaged through education. I assume people have good intentions, and I try to guide them on that path.”

What is coming up in the D&I space at Automattic?

With a growing Hiring Operations team invested in D&I, Automattic shows no signs of slowing down in this space. “Right now, we’re building partnerships with D&I consultancies to take our work to the next level. We’re also expanding our Committee and formalising process to empower others to get involved.”

We truly cannot wait to see where Anne and Toby take D&I at Automattic. Whatever the future brings, it’s bound to be full of colour.