Earning the White Helmet: A Blazing Career as a Firefighter

Meet Sharnte, a woman who has always envisaged being a firefighter – and has worked seriously hard to make it happen.

A journey of blood, sweat and tears.

Sharnte is the first to admit that her journey has not been a walk in the park. Growing up on Bribie Island, she worked as a Store Manager at McDonalds after graduating but always dreamed of being a firefighter. It took two attempts before she got her shot.

“I knocked on the door of the local fire station after graduating high school in 2010. But it wasn’t until I had another couple of years of life experience that I was handed the white helmet of an on-call auxiliary firefighter.”

For the next two years, Sharnte continued her role at McDonalds while working on-call, always keeping her goal in mind: to become a full-time firefighter. In 2015, she took a leap of faith and quit McDonalds for a three-month contract in the Queensland Fire and Emergency Services (QFES) admin department. It was the right move; she soon secured a permanent position as an Admin and Operational Capability Officer.

“This was a major achievement for me as I had fallen at this hurdle before – and maths or aptitude tests have never been my strong suit! Graduating as a permanent firefighter was my proudest moment. For as long as I can remember, I wanted to join the service – following in the footsteps of my two uncles. Like all of us, I want to help people and this path interested me the most.” 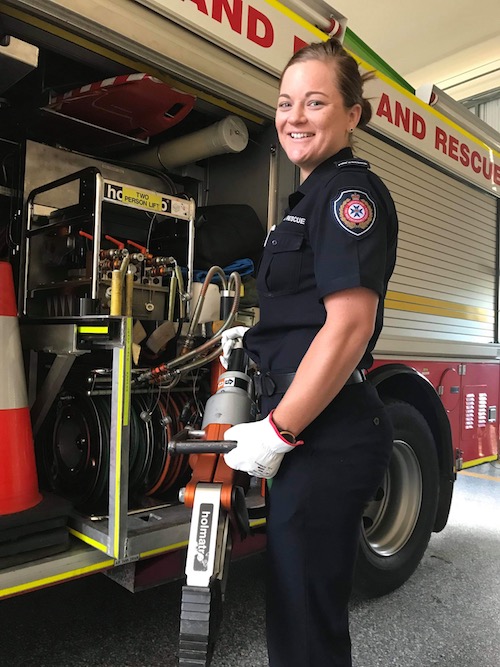 It takes a certain type of person to front the dangers of being a firefighter – and Sharnte clearly has the courage and resilience required of this demanding role.

“I believe you should strive to become who you looked up to as a kid – my heroes didn’t wear capes, so this is where I am. Whether it’s cutting a ring off someone’s finger (it’s more common than you think!), or rescuing a cat from a tree, you feel a great sense of achievement when you leave. You know you’ve made a difference to someone.”

Sharnte also highlights the strong sense of camaraderie in the brigade, which becomes absolutely critical when the sirens go off.

“Everyone has good and bad days – but we have an extremely tight support network. With the intense situations we face, we need to understand why someone might act differently because they may need extra support. It’s also about trusting each other in hostile environments. If you’re entering a burning building, your buddy is your eyes and ears – so you need a certain affinity,” Sharnte shares.

Fire‘man’ – the issue of gender in the service.

It is a little more than 20 years since women were first accepted as firefighters in Queensland. Since that time women have steadily joined the firefighting ranks and Sharnte says diversity in the service is improving.

“There’s definitely a smaller percentage of females but this is changing. The service is for anyone who is up for it. More women are interested in joining now than ever before. The bottom line is: as long as you can do it – you CAN do it. QFES promotes gender equality and is really good at communicating that careers in emergency services are worthwhile – irrespective of gender.”

Where to next? A blossoming career.

Sharnte has already accomplished so much but is confident this is just the start.

“AT QFES, you can either progress in your role and go into any of the streams – from fire education programs to building safety. QFES offers so many opportunities. I don’t know exactly what my next step is yet – but I don’t see myself leaving this career,” Sharnte says.

Finally, Sharnte offers a word of advice to anyone across the gender spectrum interested in striving to become a firefighter.

“It’s definitely a rewarding career. For some people, it could be a walk in the park. It definitely wasn’t for me. I studied every night and trained every morning. I had to push myself physically and mentally. But it has been so, so worth it.”