Equal humans: a journey to belonging

Arwen Griffioen is instantly and enduringly enigmatic. From early in our conversation with the Oregon-born Data Scientist and Mother, we get a wonderful mix of dry wit, razor sharp expression and deep, reflective thinking. Mostly though, it’s her authenticity that shines through, as she reveals a challenging career journey in a male-dominated field.

“I was one of very few women on my computer science undergrad program. My male peers were all so confident of their skills! I was convinced there was no way I was good enough.”

PhD and parenting: a winding path

When exploring a PhD, Arwen decided to go into machine learning research. The discipline intrigued her and she was excited by the global career opportunities. However, she soon encountered resistance.

“The general response from peers and the feeling from the field was, ‘why not go into human computer interaction? That’s what women are good at – the emotional side’. So the fact that I pursued it anyway was sort of a contrarian decision, I suppose.”

Arwen kicked on, supported by one “super supportive and awesome” professor, and successfully completed her Doctorate. It was a nine year journey, however In that time, Arwen also met and married her Australian husband, moved to Melbourne and had a son.

“As part of my research, I did an internship with the Victorian Government, where I met my husband. We did the long-distance thing for a while and I eventually moved to Australia to do the research component of my degree part-time, so I could have a baby. I’d heard about many situations of mothers really suffering career-wise because of ‘the mummy gap’, so I really wanted to have our child while I was working on my PhD. It wasn’t easy but it also meant I got to be home with our son, Willem, for the first three years.”

Arwen’s next step post-graduation wasn’t obvious. She knew she didn’t want to go into academia. She also knew that Australia doesn’t have a very large machine learning research community. Then she found Zendesk.

“They had a listing for a data scientist. I looked into the company and there seemed to be a good representation of diversity. I was also really sold on their recruitment videos – they’re authentic and hilarious – so I applied.”

As it happens, Arwen didn’t meet any women during the recruitment process. However, a conversation with the two male Zendesk interviewers sealed the deal.

“We chatted after the interview and it emerged that they both had children. My ‘manager-to-be’ said he worked from home one day a week to be with his kids. The other gentleman said similar things. They told me about parental leave and flexibility and I could tell it was their normal situation, not something staged for the interview. It was awesome that these men were open and proud about being professionals and committed parents.”

In the three and a half years since joining the company, Arwen has thrived. She’s had two promotions – firstly to Lead Scientist for Answer Bot (Zendesk’s Virtual Customer Assistant product) and then to Team Lead. It’s clear she feels she truly belongs with an employer which has walked the walk.

“Zendesk does not just talk about work life balance; we live it. We have great policies, and flexible working is an expected part of a team culture, built on mutual trust that each team member is doing their best. Nobody asks you to work outside of hours, unless there’s an emergency. No-one’s pinging you at dinner time. There’s very much a work life boundary – our team are all friends but we hardly talk about work when we catch up socially.”

This prompts us to ask about Arwen’s own social life. The duality of her answer is unsurprising:

“I am a very introverted person and find nothing more satisfying than a good book and a cup of tea or a glass of wine… except when I’m on my roller skates, of course!” 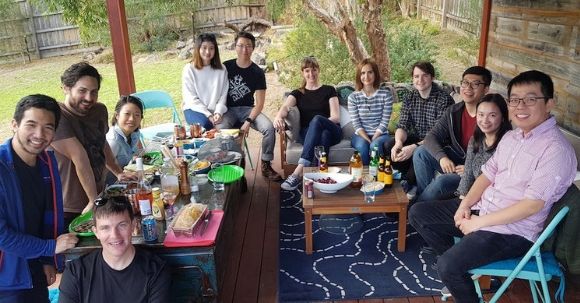 Indeed, Arwen can be found at the local roller rink with her family at least three days a week, and you might also see her skating through Melbourne’s CBD during lunch. She has two pairs of skates: one in turquoise, the other in bubble gum pink:

“I switch depending on where I’m skating and the mood I’m in. I’m actually going to a ‘glow night’ tonight. It’s skating under bright lights, all dressed in 80s gear.”

We can’t help but question how an introvert feels about bright lights and 80s glam.

“Yeah, well you don’t have to talk to anyone when you’re skating around in a circle.”

“Our team has a high level of empathy. Trusting each other as equal humans is very important to all of us. We acknowledge that we’re all quite different in where we come from and how we are.”

Arwen says that as Zendesk has grown, they have also evolved and formalised their approach to diversity and inclusion:

“We’ve formed Employee Resource Groups (ERGs) for people who identify as a Female in Engineering, Person of Colour, LGBT+, and Working Parents, of any gender. Having ERGs emphasises our company’s commitment to equality and provides a louder voice to groups that have, historically, had to keep quiet in the workplace. It feels as though we are maturing our philosophy as we grow.”

We ask Arwen what advice she has for women entering or considering a career in tech. Her answer is immediate.

“I would remind them that they’re probably better than the men they’re going to school with – and not to believe that little voice. Take a deep breath, exhale and …. you can do it.”

This leads us to our final question – How are you now? With typical candour, she says she’s getting better every day.

“I love my job and the people I work with. I feel truly supported by a husband who is also an equitable parenting and household partner. I have a very rich life now. And I’m in a position where financially and emotionally, I can take care of my family.”

“You know what? I think I feel pretty amazing.”