Equal pay day is administered by Workplace Gender Equality Agency (WGEA) as a symbolic day to reflect the national pay gap, marking the additional time from the end of the previous financial year that women must work to earn the same as men.

Australia’s current gender pay gap is 15.3% The calculations are based on using Average Weekly Earnings data released by the Australian Bureau of Statistics.

The gender pay gap has decreased by 0.9 percentage points from last year. Whilst a decrease certainly should be celebrated it is frustrating to learn that the gender pay gap has hovered between 15% and 19% for the past two decades. The ‘progress’ is certainly slow when considering Australia introduced Equal Pay legislation in 1969.

“The gender pay gap is a measure of lost potential, showing that women still face barriers to accessing senior and high-paying roles.”

​Causes of the Gender Pay Gap

The gender pay gap is influenced by a number of factors, including:

Pay Equity is a priority for DCC* and a key feature of our pre-screening criteria. We have seen amazing results from DCC Endorsed Employers in their efforts to promote gender equality at work. A number of DCC Endorsed Employers have been working towards becoming a Workplace Gender Equality Agency (WGEA) Pay Equity Ambassador and we congratulate the newest CEOs on the list from Laing O’Rourke, Robert Bird Group and QinetiQ. To become a Pay Equity Ambassador, their organization must have:

Managing Director of DCC* Endorsed Employer MSD, Riad El-Dada is also a dedicated pay equity ambassador. MSD has been named by an Employer of Choice for Gender Equality two years in a row by WGEA. 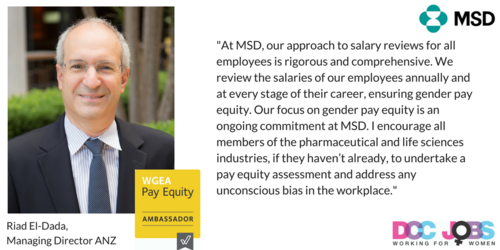 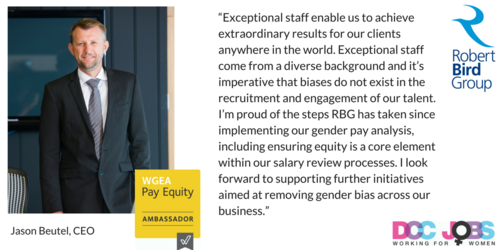 Tackling the gender super gap is another priority for our Endorsed Employers, recognizing the structural impediments currently resulting in women retiring with an average of 52.8% less in super savings compared to men.

“AECOM has invested in closing the gender pay gap and in the space of 12 months, reduced the gap by 3.4% across its 2,750 Australian employees.” 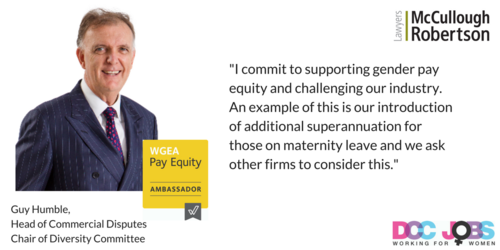 We are proud to see many of DCC’s* Endorsed Employers featured on WGEA’s Pay Equity Ambassador list: