Gender Equality in the Public and Private Sectors: What Can We Learn From Each Other?

The strategy focuses on four priority areas. Through my work at DCC Jobs*, I’m exposed to incredible organizational initiatives every day. Below, you’ll find a summary of some key initiatives, mapped out to each priority area with an outline of how gender equality directly effects each area. The education of today’s business leaders on the critical role they need to play in order to advance women and girls is crucial for improving business, society and the economy.

Per Queensland Government’s Strategy, the big issues for women in participation and leadership are:

Here are some of the initiatives we’ve seen implemented by DCC* clients, which directly impact the issues above:

The federal government understands increased women’s workforce participation is essential to support economic growth and Australia’s future prosperity. Under Australia’s G20 presidency, leaders agreed to work towards reducing the gender gap in workforce participation by 25 per cent by 2025. In Australia, this could result in up to 200,000 additional women in the labor force, above current employment projections.

A 2012 report from the Grattan Institute, Game-changers: Economic Reform Priorities for Australia, estimated that increasing female workforce participation by around 6% would increase the size of the Australian economy by about $25 billion per year.

Australia’s Hidden Resource: The Economic Case For Increasing Female Participation compiled by Goldman Sachs JB Were, estimates that In Australia, equality would boost our GDP by 11%.

One of the most innovative approaches we’ve seen organizations such as AustralianSuper take to support the economy, include paying superannuation whilst their employees are on parental leave- whether the leave is paid or unpaid. There are many factors which contribute to women having less super than men, including the time taken off work after having children. On average, women also live longer than men, therefore combined with less superannuation, there are many women late in age living in poverty.

Gender inequality is consistently cited as an underlying determinant of violence against women. Per the South Australian Premier’s Council for Women, social norms and gendered expectations shape the roles of men and women, defining what is considered appropriate behaviors for each sex. In many societies, women are viewed as subordinate to men and have a lower social status.

In many cases this has led to domination over and discrimination against women by men. Violence against women is one way women are forced into lower positions of power.

The World Health Organization states that gender is a critical determinant of mental health and mental illness. If you look at inequality, women being less empowered than male counterparts can directly contribute to anxiety and depression. In addition to this, ensuring and supporting flexible work options has a significant impact on physical and mental health. This could be anything from ensuring you can fit exercise into a busy work schedule to spending more time with family for mental wellbeing.

Commbank is just one example of an organization supporting their employees to be as healthy and happy as possible, and to lead balanced and productive lives. They offer private health insurance, wellbeing workshops, have their own sports club and provide online resources.

In celebration of Queensland Women’s Week and International Women’s Day in March, DCC* together with our corporate partners Deloitte and Aurecon are hosting several events you may be interested in:

Gender Equality in the Public and Private Sectors: What can we learn from each other?

DCC* are fortunate to work with the most passionate HR & D&I practitioners in Australia. Their dedication to creating diverse and inclusive workplaces and advocacy work for gender equality outside of their organizations is achieving positive change in their industries.

The DCC* Cross- Industry Innovation Series is an exclusive, interactive roundtable discussion for those who want to accelerate gender equality within and outside of their organizations and learn from each other. Due to the nature of this event, seats are strictly limited.

Held in every capital city in Australia and in Auckland, this is an incredible opportunity for primary school girls, along with their parents or guardians, to learn why coding is cool! Read more here. 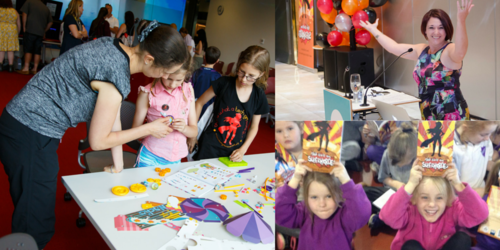