How BAC is taking gender diversity to new heights

Think of an airport runway and an employee in ‘hi-vis’. Who do you picture?

OK, you know WORK180 so you know where we’re going with this… but such was the challenge faced by Brisbane Airport Corporation (BAC) in trying to achieve greater gender-diversity in its technical and operations teams:

How do you encourage more women to apply for roles that few women have ever done?

Larinda Donnellon and her colleagues knew the answer was to review and reengineer their whole approach. So they did.

Larinda is HR Officer at BAC. Working alongside her HR colleagues, people leaders and 400+ employees, she delivers a range of initiatives and ongoing work to drive up diversity and inclusion, from recruitment and onboarding to the overall culture and employee experience.

We start by asking her why diversity matters at BAC.

A future built on diverse perspectives.

“Here, we’re focused on diversity of perspectives. There’s nothing worse than ‘group-think’ and an attitude of ‘we’ve always done it this way’. The point of all this was to get us into new markets, to draw on transferable skills and bring new energy and ideas into the organisation. We want to diversify talent at BAC.”

While Larinda is quick to signal that BAC has more distance to travel in its Diversity and Inclusion (D&I) journey, she proudly shares the progress they’ve made in recent months, and it’s a compelling account. She speaks of a deliberate push to formalise BAC’s D&I initiatives and standards, and to become more proactive and creative in this space.

“Together, we’ve turned up the volume and pushed ourselves to try new approaches to attract, empower and retain great talent. As a result, we’ve achieved a lot!”

Indeed they have. Among other results and outcomes, BAC is now:

· Promoting diversity across all roles, especially in management and in areas of traditional under-representation

A particularly impressive example is the Airside Operations Officer (AOO) role, which has traditionally been very popular… and completely male-dominated.

“We were struggling. The last few times we’d gone out to market for an AOO, we’d had just one or two applications from women. We tried tweaking the language in the job ad to be more inclusive but it made no difference.”

Frustrated and determined to break the spiral, Larinda and the team regrouped and completely redesigned their approach to advertising. They took out the technical lingo that only people with airside or airport experience can understand. Furthermore, they removed many of the unnecessary ‘requirements’, adding instead valuable traits and skills that people could bring from their experiences outside of the aviation industry. They also produced a video, showing what you’d be doing in the role, what you’d ‘get’ from it, and what the environment is like. 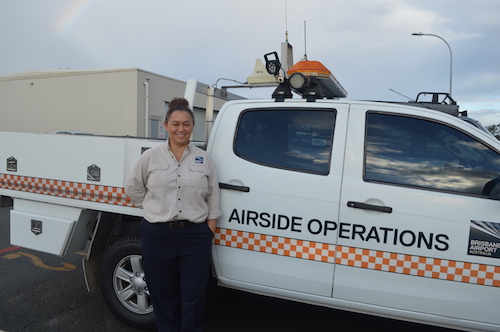 The campaign was a huge success.

“It was the factor that changed everything. From the initial round of recruitment, we hired three women into AOO roles. They’re just about to start work with us! We’re now going to push this across other areas, including IT and engineering.”

Importantly, the early response among the current BAC team has also been very positive. Larinda says that many of the male AOO’s – some of whom have been in the role for many years – have been very supportive and that they “want to be part of the change and BAC’s gender-diverse future”. It’s also great to hear that a woman who has been working in the AOO role has recently been promoted to Team Leader.

For someone in Larinda’s position, that must be fantastic to see.

“Of course. It’s positive for all of us… and it’s really exciting. You’re putting time, energy and money into diversity. It’s a great place to be and I’m honoured to be among the team and have such strong backing from our new CEO and the Senior Management Team.”

Larinda shares that BAC has had a longstanding desire to achieve greater diversity. She says they’ve always worked hard to support employees, including helping people return to work. The employer respects that people have different priorities, needs and challenges at different stages of their lives. She says that for BAC, it’s all about the output rather than the hours, and that this is supported by their policies, including flexible / remote working arrangements.

“It wasn’t that we didn’t want women to apply; they just didn’t know it! And we weren’t being smart and proactive enough to go out and get them. We’ve now opened ourselves up to a whole new market of talented women who may not have experience of our industry but who have all the attributes to succeed.“

Larinda offers three pieces of advice for other employers facing similar challenges. Firstly, she says, just do it.

“Take a chance; try it. We didn’t know if we’d succeed or fail but we felt we had little to lose. The results have been amazing and have opened up whole new markets for us… as well as a fresh, energised perspective.”

Her second tip is to think differently and get creative. She speaks enthusiastically about the videos they produced, which do so much to bring the talent offer to life and show women that these roles are for them too.

Finally, she recommends partnering up with the right people, and we’re proud of what she says about BAC’s relationship with WORK180:

“WORK180 have been instrumental in advising us on the challenges and the solutions. With the AOO role, they played a huge part! And they have also encouraged and enabled us to think about how we can push diversity in other areas of the business. Becoming a WORK180 endorsed employer wasn’t a box to tick; It was a journey, and one we’re proud to be in.”

As are we, Larinda! Thank you and congratulations on all that you and BAC are achieving.