If-then: A HBR tip for goal setting we hadn’t heard of

This article was originally published on The Business Woman Media.

A few weeks ago, Valeria (Diverse City Careers* Co-founder) and I hosted the “Setting yourself up for success in 2016” Meetups across Australia. All events were fantastic and it was great to engage with such a wonderful group of career driven and like-minded ladies.

During the sessions, we covered the ‘usual suspects’ of goal setting tips, namely the S.M.A.R.T principle. This principle helps you set goals so you can actually reach them- the acronym stands for:

So for instance, instead of setting an ambiguous goal such as “I want to be healthier this year”, a S.M.A.R.T goal will be “I want to run 5km in 27minutes by the 30th March”.

Reaching a new goal often comes down to some sort of habit change. Habits are embedded in us as humans and the majority of the time we are functioning on autopilot, which is why action plans are so important.

Based on over 200 studies, Harvard Business Review concludes that people who use a technique called ‘if-then’ planning are 300% more likely to achieve their goals. This is a huge impact and has certainly worked for me!

‘If-then’ plans work because contingencies are built into our neurological wiring. Humans are very good at encoding information in “If x, then y” terms and using those connections (often unconsciously) to guide their behavior. When people decide exactly when, where, and how they will fulfil their goals, they create a link in their brains between a certain situation or cue (“If or when x happens”) and the behavior that should follow (“then I will do y”). In this way, they establish powerful triggers for action. (HBR- Get Your Team to Do What It Says It’s Going to Do by Heidi Grant Halvorson)

Some examples of ‘if-then’ planning may be:

“If I begin procrastinating, then I’m going to set a timer and work on my highest priority task for 25 minutes.”

“If I go to a restaurant and they offer me dessert, then I’m going to order a coffee instead.” 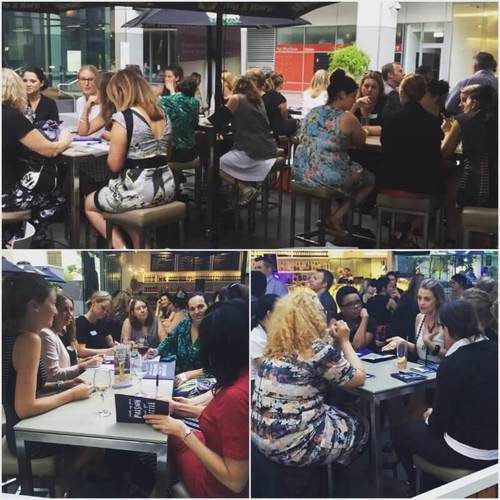 During the Meetups we held, it was also great to hear about some of the other techniques the participants use to achieve goals. Some of my favorite were:

If you missed out on DCC’s* last Meetups, don’t worry- we will be continuing to hold them bi-monthly and you can join our Brisbane, Sydney and Melbourne Meetup groups to keep across them.

Wishing you the most successful year yet!