Labelled as ‘crass’ and subsequently removed after a few hours of publication, it’s likely this government-backed cyber reskilling advertisement never reached your screen. However, it’s almost certain you’ve seen (and perhaps even felt) the outrage it caused.

We’re disappointed that people’s hopes, dreams, and hard earned careers in the creative industry have been patronized by this campaign, and that the important message — the need for more diversity in cyber — has been lost along the way. So to salvage what we can from the wreck of a job ad, we’ve dissected it into good, bad, and ugly parts. And by doing so, we also hope to help employers attract women in cyber without ever doing such damage again.

What is the cyber reskilling ad?

The ad shows a ballerina and the words: ‘Fatima’s next job could be in cyber. (she just doesn’t know it yet).’ This is followed by the Cyber First campaign slogan: ‘Rethink. Reskill. Reboot.’ 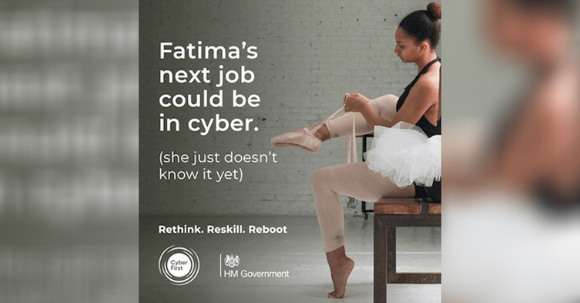 Designed to encourage more diversity and inclusion in cyber, both the ad’s creative and the timing of its publication has resulted in it being widely received as an instruction for those in the creative sector — which the government has been criticized for neglecting during the pandemic — to ‘get a real job’ in cyber. So while promoting cyber as a career option for all is a good point, the bad timing and ugly execution of the ad may have done more harm than good.

The purpose of the ad is important; there is a both a moral and economic need to attract a wider range of experience and talent to the cyber industry. According to a joint report by the NCSC and KPMG UK, the UK is facing a cyber security skills gap. And the research by organizations such as the Chartered Institute of Personnel and Development (CIPD) says that closing this gap with people from a diverse and inclusive background will lead to the following:

Venue closures, restrictions, and a relative lack of government funding (before this week’s announcement of £257 million for the arts) have all seen creative industries suffer significantly during the pandemic. And after the chief financial minister’s controversial comments seemed to suggest those in this sector should find a new job, the UK’s creatives were left feeling understandably undervalued — a feeling that grew into anger for many after seeing a campaign that suggested a dancer should now ‘Rethink. Reskill. Reboot.’

It’s also important to note that while the advert is clearly aimed at encouraging women from underrepresented backgrounds to get into cyber, it could be at the cost of diversity and inclusion in the arts; the pandemic has already seen a decrease in creative career opportunities for those individuals with lower economic, social, and cultural resources.

The ugly: Every woman should be empowered to ‘choose’ their workplace

Beyond its tone deaf timing, the ad itself has been accused of having an ominous tone. In particular, the wording ‘she just doesn’t know it yet’, which suggests a lack of control over her career. Whether you agree or not, the suggestion itself highlights the important role language plays when attracting women to apply for underrepresented roles. This is a challenge that WORK180 is helping many organizations overcome with JobAd180, a clever tool that helps you write more inclusive and attractive jobs ads.

The reaction to the language in the cyber reskilling ad also highlights a clear desire for control over our own career choices, particularly during such turbulent times. Instead of telling the nation that Fatima could have a career change, we suggest it would be more empowering and effective to tell the public why women would want a career in cyber.

So, how can we attract more women in cyber?

Now we know what not to do, it’s time to find out how we can encourage and empower women to choose a career in cyber. And who better to ask than those already breaking down barriers and making their mark in the industry? You can find all the answers in our recent interview with 16 impressive women working in cyber security.

If you’d like more help attracting, retaining, and nurturing women in your workplace, join our trailblazing Endorsed Employers today.